Kelowna is a city on Okanagan Lake in the Okanagan Valley in the southern interior of British Columbia, Canada.

It serves as the head office of the Regional District of the Central Okanagan. The name Kelowna derives from an Okanagan language word for “grizzly bear”. Kelowna is the province’s third-largest metropolitan area (after Vancouver and Victoria), its seventh-largest city overall, and the largest in the Interior.

After many years of suburban expansion into the surrounding mountain slopes, the city council adopted a long-term plan intended to increase density instead – particularly in the downtown core. This has resulted in the construction of taller buildings, including One Water Street – a 36-storey building that will be among the tallest in Kelowna once completed in 2021.

Nearby communities include the City of West Kelowna (also referred to as Westbank and Westside) to the west, across Okanagan Lake; Lake Country and Vernon to the north; Peachland to the southwest; and Summerland and Penticton to the south. 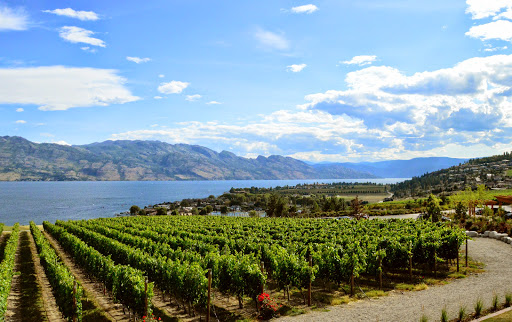 Why holiday in Kelowna

Kelowna is the largest city in the tourist-oriented Okanagan Valley with a population of about 142,000 in the city, and 215,000 in the metropolitan area (2020). During the summer, Okanagan Lake is the main draw, this 135 km-long (84 mi) jewel is a big draw for boaters (power and sail), swimmers and kite-boarders; in addition, golf, hiking and biking are popular summer activities. In winter thousands of tourists come from all parts of the world to ski at Big White resort, which is 55 km (34 mi) from the city.

Kelowna produces wines that have received international recognition. Vineyards are common around and south of the city where the climate is ideal for the many wineries. Tourists also come in the Sep-Nov (mostly) to experience and taste the Okanagan’s world-class wines from wineries throughout the valley.

What is the climate in Kelowna

Kelowna is classified as a humid continental climate or an inland oceanic climate, with dry, hot, sunny summers and cool, cloudy winters, and four seasons. Summers in Kelowna are hot (sometimes extremely hot) and sunny. Not unusually, heat waves occur in July, August, and even June and September on occasion, where temperatures above 30 °C (86 °F) persist for weeks.

During summer, clear, dry air allows night-time temperatures to fall rapidly. Kelowna has the second mildest winter of any non-coastal city in Canada, after neighboring Penticton, caused by the moderating effects of Okanagan Lake combined with mountains separating most of BC from the prairies. Weather conditions during December and January are characterized by persistent valley cloud as Okanagan Lake hardly ever freezes.

The Best of Kelowna

The exact dates of first settlement in the Okanagan Valley are unknown, but a northern migration led to the habitation of this area some 9,000 years ago. The Indigenous Syilx people are the first known inhabitants of the region, where they continue to live today.

In 1811, David Stuart travelled to the Okanagan Valley, becoming the first European to do so.Despite this, it was not until 1859 that Father Pandosy, a French Roman Catholic Oblate missionary, became the first European to settle there. Pandosy’s settlement was located at l’Anse au Sable (Bay of Sand), which he named in reference to the sandy shoreline. Although the population remained small for the rest of the 19th Century, sustenance fruit growing expanded in Kelowna during the 1870s, and by the 1890s, commercial agriculture had become firmly established.

Kelowna was officially incorporated on 4 May 1905 with a population of 600. The town’s first mayor was Henry Raymer.

Although agriculture had become an important mark of Kelowna on the surrounding region, the town was entirely reliant on transportation over Okanagan Lake until 1925. In 1893 the Canadian Pacific Railway constructed the steamer SS Aberdeen on the lake, which served as the first significant transportation link between Kelowna and Penticton, greatly increasing the speed of Kelowna’s growth. On 11 September 1925, the Canadian Pacific Railway was finally extended to Kelowna, ending the town’s reliance on Okanagan Lake for transportation and trade.

In 1911, Chinese revolutionary Sun Yat-sen visited Kelowna for fundraising. At that time, around 15% of the population was ethnically Chinese.

On 6 August 1969, a sonic boom from a nearby air show broke a quarter million dollars worth of glass, injuring six people. The destruction was caused by a member of the United States’ Blue Angels during a practice routine for the Kelowna Regatta festival when the pilot accidentally broke the sound barrier while flying too low.

On 25 November 2005, the First Ministers and National Aboriginal Leaders signed the Kelowna Accord, which sought to improve the lives of Indigenous peoples.

Kelowna celebrated its centennial in May 2005. The same year, construction began on the new five-lane William R. Bennett Bridge to replace the three-lane Okanagan Lake Bridge, as part of a plan to alleviate traffic problems during summer tourist season. The new bridge was completed in 2008.

Kelowna from Knox Mountain in winter, 2019
Kelowna is classified as a humid continental climate or an inland oceanic climate per the Köppen climate classification system due to its coldest month having an average temperature slightly above −3.0 °C (26.6 °F) and below 0 °C (32 °F),[23] with dry, hot, sunny summers and cool, cloudy winters, and four seasons.[24][25] The official climate station for Kelowna is at the Kelowna International Airport, which is at a higher elevation than the city core, with slightly higher precipitation and cooler nighttime temperatures. Kelowna has the second mildest winter of any non-coastal city in Canada, after neighbouring Penticton. This is caused by the moderating effects of Okanagan Lake combined with mountains separating most of BC from the prairies; however Arctic air masses do occasionally penetrate the valley during winter, usually for very short periods. The coldest recorded temperature in the city was −36.1 °C (−33.0 °F) recorded on 30 December 1968.

Weather conditions during December and January are the cloudiest in Canada outside of Newfoundland due to persistent valley cloud. As Okanagan Lake hardly ever freezes, warmer air rising from the lake climbs above colder atmospheric air, creating a temperature inversion which can cause the valley to be socked in by cloud. The last time the lake completely froze over was in the winter of 1969. It may have frozen over in the winter of 1986. This valley cloud has a low ceiling, however, and often bright sunshine can be experienced by driving only 20 minutes or so up into the nearby mountains, above the cloud. Summers in Kelowna are hot (sometimes extremely hot) and sunny, with daytime temperatures often exceeding 32 °C (90 °F). The hottest recorded temperature at the airport was 39.5 °C (103.1 °F) on 24 July 1994, and the highest temperature ever recorded in the city was 41.0 °C (105.8 °F) on 4 August 1998, near but not at the airport.[28] Not unusually, heat waves occur in July, August, and even June and September on occasion, where temperatures above 30 °C (86 °F) persist for weeks. During summer, clear, dry air allows night-time temperatures to fall rapidly. The city averages about 380 mm (15 in) of precipitation per year, with about 1/5 of the precipitation falling as snow, the bulk in December and January; however, June is the wettest month of the year.

While some smaller communities such as Blue River and Golden get less wind, Kelowna has the greatest percentage of “calm” wind observations for any major city in Canada (39% of the time). The four-year average wind measured at the airport has been less than 5 knots on average 10/12 months of the year between 2008 and 2011. As shown in the climate chart below, Kelowna has an average high temperature that is above freezing every month of the year – an exceptionally rare phenomenon for an inland Canadian city. In fact, average high temperatures in January surpass those of St. John’s, Newfoundland. Kelowna’s average year-round high temperature of about 14.3 °C (57.7 °F) is also one of the highest in Canada – largely due to the rare combination of high summer temperatures typical of continental climates, along with relatively mild winters – a very rare feature of a continental climate.